PE Exit Strategies – The revival of the IPO Option 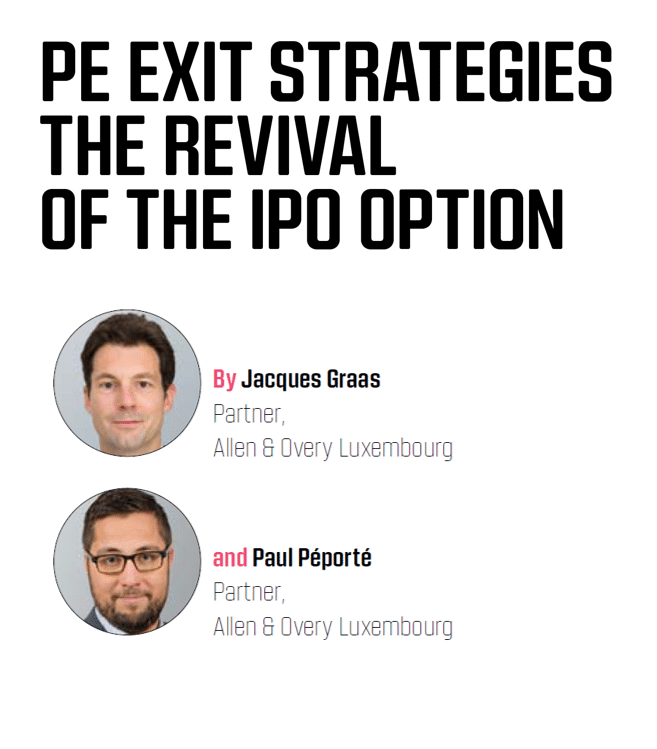 Last year’s strong resurgence in initial public offering (IPO) activity is continuing in 20211, encouraging many PE investors to re-examine the benefits of pursuing an IPO as an exit strategy. And with so many PE funds having an established presence in Luxembourg, with structures already in place that are readily convertible into listing
vehicles, the spotlight has returned to Luxembourg as a highly flexible European hub for structuring and executing IPO exits, with the shares eventually admitted to the main trading venues in Europe and/or the U.S. As the focus returns to the IPO market, how can sponsors make sure they are ready to take advantage of initial share listings as an exit option? No PE investor wants to commit upfront to a single exit strategy. Market conditions and the underlying performance of the business will dictate whether an IPO is the appropriate direction to go. Selling the business to a strategic buyer or to another PE house through a secondary buy out may well be a better bet.
But to ensure an IPO exit remains on the table as an option it is vital for sponsors to plan carefully – and well in advance.
Indeed, it’s a process that needs to start at the time the initial investment is made, even if the point of exit is a couple of years down the road. Initial considerations Importantly, the vehicle needs to be structured in a way that protects the sponsor’s ability to pursue an IPO, unimpeded. That means having a shareholder agreement in place that includes in particular easily enforceable drag along clauses to pull all involved parties, including management and other shareholders, down the IPO path.
Strong covenant undertakings will also be needed setting out the exit options and the giving the sponsor the freedom to appoint investment banks to launch and underwrite the IPO process. Since the vehicle is likely to be heavily financed by debt provided by banks, financing agreements must also be framed in a way that ensures banks have the security they require without such security potentially blocking an IPO.

USING A LUXEMBOURG VEHICLE FOR THE IPO OFFERS A RANGE OF
ADVANTAGES, FROM A REGULATORY AND CORPORATE LAW POINT OF VIEW.

Using a Luxembourg vehicle for the IPO offers a range of advantages, from a regulatory and corporate law point of view. Three issues are at the forefront at the time a decision to pursue an IPO is taken:
-Corporate Restructuring: The first is proceeding with the corporate restructurings required to make the target company “IPO-ready”. This may in particular result in a conversion of the existing holding company into a public limited liability (société anonyme), which is the main corporate form used for equity listings, and implement necessary amendments to the articles of association. Luxembourg’s corporate law system offers sponsors significant flexibility in this regard. With no specific (mandatory) corporate governance code in place, business owners in particular have greater freedom to devise a suitable corporate governance structure. Moreover, organising annual general
shareholder meetings is far less onerous a task than in other jurisdictions and the set-up of the share capital is not subject to the restrictions imposed in some foreign jurisdictions (e.g., no minimum nominal value, no limit as regards authorized capital amounts).
-Prospectus Approval: One of the most vital tasks is preparing the public offer and listing prospectus – where the Commission de surveillance du secteur financier (CSSF) is the competent authority. With prospectuses running to many hundreds of pages, this involves detailed due diligence to present a full picture of the business’s material contracts, its main operations and three years of historical financial statements. Where new operations have been added to the business through M&A activity, the prospectus may also need to present pro-forma financials of how this has impacted overall financial performance. The CSSF is a powerful but investor protective regulator with a big prospectus review team and, typically, it can deliver the initial detailed set of comments in as few as ten working days – considerably faster than the 20 working days set out by European law. Prospectuses approved by the CSSF can be submitted in English, German, French or even in Luxembourg language.
-Choice of Listing Venue: It is typical to rely on a Luxembourg holding company as the listing vehicle for an IPO and to proceed with such IPO on a market outside of Luxembourg (throughout the EU but also NASDAQ/ NYSE and Asian markets). This approach is possible to the extent that under the EU’s Prospectus Regulation, approved prospectuses can be passported to other jurisdictions within the European Economic Area without the need for further regulatory scrutiny, allowing the sponsor to choose the most suitable market(s) on which to list (typically where the business has its main centre of operations and is better known).
A good recent example for that is last year’s exit by Permira, Cinven and Mid-Europa Partners from Poland’s thriving online retailer Allegro in the biggest ever IPO – organized through a Luxembourg listing vehicle – on the Warsaw Stock Exchange.

SPACS HAVE EXPLODED IN THE U.S. SOME USD88BN IS ESTIMATED TO HAVE BEEN RAISED IN U.S. SPAC IPOS
IN THE FIRST QUARTER OF THIS YEAR, MORE THAN IN THE WHOLE OF 2020, ITSELF A RECORD YEAR.

The rapid emergence of Special Purpose Acquisition Companies (SPACs) may well change the dynamics of the IPO market and the calculations sponsors and targets need to make. These so-called “blank cheque” companies, launch an IPO to raise finance with a view to identifying and acquiring a target or targets, usually within a 24-month period.
As such they offer targets an alternative way to achieve a listing compared with the traditional IPO. And in some senses, the process is easier too. Since there is no target at the point of the SPAC IPO, the prospectus is substantially lighter than would normally be the case, serving mainly to set out the credentials and investment strategy of the sponsor and outlining the risks for investors if no target is found within the lifetime of the scheme, as against detailed business descriptions and MD&A (for “management discussion and analysis”) sections. SPACs have exploded in the U.S. Some USD88bn is estimated to have been raised in U.S. SPAC IPOs in the first quarter of this year, more than in the whole of 2020, itself a record year. Multi-strategy asset management funds – as opposed to pure buy-out PE Houses – have readily joined the frenzy and we are beginning to see money raised in the U.S. being invested in targets in Europe and elsewhere. Though the creation of SPACs is a trend that came later to Europe, starting mostly with vehicles incorporated and listed in the Netherlands, it is now gaining increasing traction in other jurisdictions, including Luxembourg. It looks likely to continue growing. That begs the question – will SPACs co-exist with the traditional IPO as an alternative way to admit shares for trading on public markets? Or will they, increasingly, become the preferred
route for taking businesses to the market? Another open question is whether the regulatory framework will, at some point, be adjusted to specifically deal with SPACs or regulators adopt restrictive approaches in respect of SPACs.
The next months will certainly provide additional insight on the SPAC impact, but regardless of the SPAC market development, it seems clear that IPO exits for PE investments will remain an attractive alternative and that Luxembourg vehicles are poised to continue playing a significant role in this regard.

1. Latest market data is confirming that listings on stock markets around the world are running at a record pace, with both deal numbers and values at their highest levels for the start of any year in the last two decades (source: Financial Times, https://www.ft.com/content/857c1286-d35e-404a-ae7c-8d04b7508810)